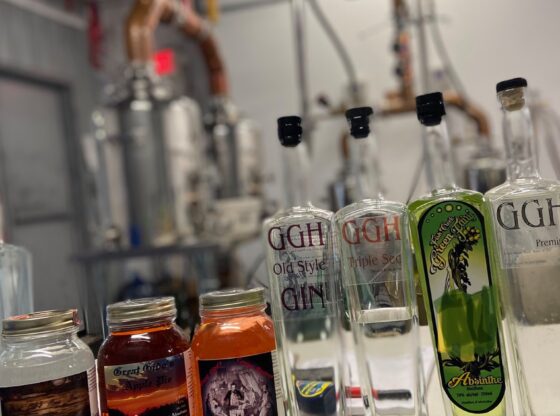 Welcome to the Great Gido’s Homebrew Distillery.  While reading through some articles, I came across a post about this small distillery in Saskatchewan Canada that only opened in 2017, selling their Resilience Vodka to Saskatchewan locations.  Nothing out of the normal for a small craft distillery.  Their distillery being unknown to me, I decided to dive in to some online searches and found the Great Gido’s Homebrew Facebook page.  This is where I found Absinthe in Saskatchewan. The more I researched the more I found that they had a very unique product line outside their vodka.  They distill Absinth, Gin and Triple Sec on the Canadian Prairies.

I recently had the opportunity to reach out to Great Gido’s Homebrew Distillery’s Owner and Master Distiller, Mark Holinaty through social media.  Mark was very open to being interviewed for an article on Still On Tap to discuss his distillery and his products, and he has some very interesting products that are being made in Saskatchewan Canada.  Very quickly after learning of their Resilience Vodka, I found out about their Absinthe, Gin, and their Triple Sec.

During our discussion, I found out that term Gido means Grandfather in Ukrainian. And some of Marks’ recipes have been handed down from his Great Gido, so hence the Great Gido’s Homebrew.  These recipes come from a time where artificial flavours did not exist.  Mark is staying true to these recipes and techniques, by only using whole natural products to flavour his spirits, and fresh fruit & honey in the fruit mashes.

The distillery is made up of a pair of smaller double kettle stills that are connected to a central column called a Reciprocating Still. Each pair is dedicated to specific products. To run these stills, have to have equilibrium which means hitting boiling temp at same time and boiling at same rate throughout the distillation process. The controllers are adjusted constantly to make sure this occurs. Once heated up only runs at like 1/3 power and tweaked threw out distillation to insure boiling temps change the same.
The kettles with the dephlegmenator and sight glasses, distills the base spirit, and the other kettle distills the mash with the solids and distills the spirit at 70%. These products are not proofed down.

This is a very unique design not seen in too many craft distilleries in this area.

The Absinthe really stood out as the product of discussion, because it only became legal again in 2007, after being banned in the early 1900’s for being known for its halogenic property.   And the most interesting thing about their Absinthe production is that the main ingredient of Woodworm, is naturally harvested, and they are the only Canadian distillery to do this.  The Other Absinthe distilleries in Canada are using either commercially grown woodworm or artificial flavouring.  So, this really stood out.

While Mark was at his Great Uncle’s 50th wedding university, he learned of a distilled product that his Great Gido made and had used from medicine to a drink poured over a sugar cube.  His uncle said he had used a sage looking plant that only bloomed once a year to make it.  Mark thought instantly that this sounded like Absinthe.  With a little research and a wander around the family farm, Mark found this mysterious plant and texted a picture of it to his Great Uncle.  “That’s the plant” his Great Uncle said.  It was Wormwood.  So, Mark now harvests this wormwood and makes his Great Gido’s secret home remedy of Absinthe.

For his Gin distillation, instead of using a traditional gin basket in the still, he keeps the botanicals in the mash while distilling, so they are part of the vapour instead of being infused when passing through the gin basket.  If you understand the distillation process, having hard ingredients in boiler of the still runs the risk of scorching the distillate, either on the bottom of the still if it is heated by flame, or on the heating elements if electrically heated. So great care has to be taken to keep the mash agitated so it does not settle on these parts during the distillation process.

Their Triple Sec is a true Triple Sec and is made from real oranges, and is not an orange flavoured vodka as some other products on the market.  This involves cutting and a series of different macerating processes before being distilled with the solids.

It is distilled a couple more times to separate out the different essential oils. Mark explained that there are over 100 essential oil in an orange peal, so it it up to the Master Distiller to know when to stop the distillation process, which is done by the master distiller’s taste.

Their Triple Sec is really distilled by the eye of the beholder and will be unique to their distillery.

Looking to the future

I am writing an additional article specific on the Absinthe distillation. We are planning a trip to the Great Gido’s Homebrew distillery later this summer where we will see the wild woodworm harvest and is process. It is a guarantee that not many people get a chance to see this process so I will post another article on this unique process.