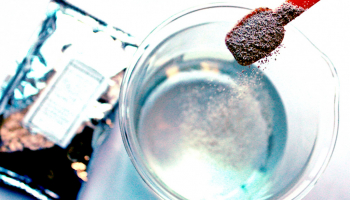 Active dried yeast is a form of yeast in which yeast cells are dehydrated, leaving them in a dormant state. Some of the benefits associated with ADY include its capacity to be stored for extended periods of time and the speed at which it can be prepared for use.

There is some conflicting information when it comes to adding active dried yeast to your must (fruits), mash (grains) and wash (sugars). Some recipes will say sprinkle the yeast on top of the juice while the packaging instructions/other recipes will instruct you to put the yeast in warm water first before adding it to your juice. So, which one of these two methods are correct?

The process of adding your yeast to warm water first is called re-hydration. The idea behind re-hydrating dry yeast is that it reacclimates the cells to a liquid environment. In their dried state, yeast cells are dormant, which is ideal for storage but not for fermentation. Hydrating them turns them back to their active state and this, in turn, allows the yeast to ferment.

If you add the dried yeast directly into the must, fermentation will start eventually anyway. So why do the yeast producers recommend this extra step before adding the yeast to your must?

Since yeast are living organisms, any big change to their environment can damage their cells and cause them to die, reducing the number of healthy, active cells at the start of fermentation.  Fruit juice contains many different compounds which include acids, phenolic compounds, sugars, residual SO2 etc. During these first initial minutes of re-hydration, the yeast cell wall cannot differentiate what passes through its cell wall and thus allowing anything to enter. Some of these compounds that naturally occurs inside fruit juice are toxic to the yeast. Under normal conditions, yeast will selectively prevent these toxic compounds from passing through, but during the initial stages, these compounds will rush right through, damaging the cell.  The moment the cell wall is properly reconstituted the yeast can regulate what goes in and out of the cell.

The risk of cell death is lowered when yeast is added to a neutral, warm environment (such as water) and then slowly being exposed to the juice conditions (during yeast re-hydration, a small amount of juice will be added in increments in order to acclimatize it). Keep in mind that re-hydration should never be done with cold water, as this can permanently damage the yeast cells and negatively affect their growth. Too low temperatures can be even more harmful compared to no re-hydration.

if you are working with volumes less than 100L, and decide not to re-hydrate your yeast, we recommend working with a dosage rate of 1 gram per L. The higher dosage rate will compensate for the cell loss during direct addition, ensuring that you have a high enough viable cell count in the start of fermentation.

The exact steps involved in re-hydration may differ between strains, but an example of a general re-hydration process would be:

Yeast activators are very important when inoculating on a larger scale. It is a natural yeast re-hydration nutrient containing a balance of micro-nutrients. It was developed to enhance fermentation kinetics and thereby potentially avoid problematic fermentations. When using the yeast activator, the yeast re-hydration process is a bit different since you need to dissolve the activator in warm water before you add the active dry yeast. The yeast soaks up the valuable micro-nutrients as they re-hydrate. Infusing yeast with these essential nutrients arms them against ethanol toxicity and optimizes nutrient availability to the re-hydrating yeast culture.

The following protocol can be followed when inoculating with a yeast activator.

In short, adding the yeast directly to your juice is not wrong, but re-hydration does decrease the number of cell deaths during inoculation. If you are working on a large scale (volumes more than 100L), we do recommend taking the time and re-hydrate your yeast properly to ensure that you have a healthy yeast population at the start of fermentation.

Is Smoker Wood Chips suitable for Wooding Spirits?
The importance of yeast nutrients