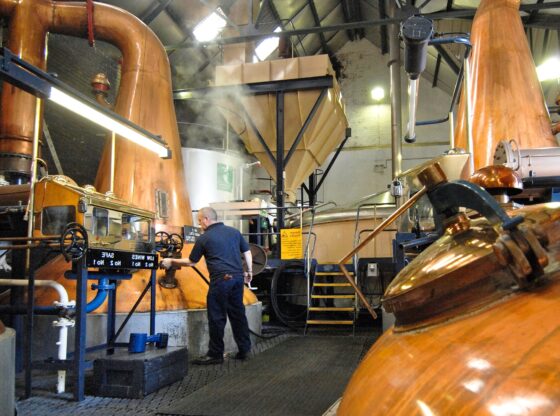 What are the different distillation methods? Firstly, lets look at what is the principle of distillation. The important aspect remains the means of separating alcohol from an alcohol containing liquid. Alcohol boils at 78.3º Celsius at sea level while water boils at 100º Celsius. When an alcohol-water solution is heated to a temperature somewhere between the boiling point of the alcohol and the water (depending on the ratio of the liquids), alcohol-water solution starts to boil with more alcohol molecules vaporizing than water molecules.

All distilling equipment function on this simple principal but may use different techniques and/or additional equipment to obtain the final distillate. The equipment used to distill will influence and determine the quality and taste of your end result.

Alembic stills employ simple distillation methods. They are made up of a copper pot often referred to as a boiler that is connected to a cooling recipient by means of copper piping known as a swan neck. The material to be distilled is inserted into the boiler along with water. The pot is then fired by wood, gas or coal. The distiller has very good control over the pot still temperature and can regulate the strength of the distillate to fit his objectives.

How does it work?

By way of example when boiling water, we have often observed how the steam from a kettle condenses back to water when it comes in contact with a cold surface. This simple technique is applied to the separation of a mixture into its different parts by boiling the mix in a boiler, condensing the vapours and collecting the resultant liquid.

By taking accurate temperature readings one can ascertain which component is dominating at that temperature. As the vapours accumulate in the head of the alembic, they find their way to the condensing recipient via a connecting tube or swan neck.

In the case of the traditional alembic the swan neck tubing leads to a serpentine coil in the condenser filled with running cold water. Once the vapours come into contact with the cold surface of the serpentine coil they condense to their liquid state and trickle down to where they are collected, in an appropriate vessel drop by drop.

This process has to be carefully monitored so you know exactly what you are collecting at any given stage of the distillation as we do not want to be collecting any harmful substances.

Obviously, its main application is for the distillation of alcoholic spirits from any number of fermented substances in which alcohol is present. It may seem obvious to say that, but to clear up any apparent misconception it must be stated once again that what we are doing here is not making something new which was not there to begin with but simply separating the alcohol from the mix. So, you will end up with the same amount alcohol but more highly concentrated.

As suggested by its actual name uses steam to distill instead of water and steam. This system is easily controlled, and it is the distillation process required to obtain better quality essential oils and hydrosols. Steam distillation is carried out in a still. Fresh or sometimes dried botanical material is placed in the plant chamber of the still and pressurized steam is generated in a separate chamber and passed through the organic material to remove the oils.

Steam distillation is a technique employed to distill alcohol or extract essential oils from organics by passing steam generated in a pot still through the plant material.

Temperature sensitive compounds which would normally decompose through simple distillation vaporize at lower temperatures when subjected to steam in the vapor chamber or column of the still. This allows for the separation of essential oils, which tend to be less soluble in boiling water, from chemically complex materials.

When the steam passes through the organic material tiny pockets that hold the essential oils open to release the essential oil molecules without damaging or burning these delicate components. The distillate will contain a mix of water vapor and essential oils which return to their liquid form in the condensing recipient and are separated using a Florentine separator. Both the essential oils and the water called floral water or hydrolats is retained.

As for essential oils, using steam for alcohol distillation permits the distillate to retain the more delicate flavours and aromas which would otherwise breakdown if subjected to high temperatures. This process is typically used to extract essential oils from aromatic plants to flavour liqueurs.

Alternatively, alcohol may be distilled from fermented matter placed in the column of an alembic such as pressed grape skins left over from wine making.

There are obvious advantages to steam distillation with commercial applications in the food, medical and chemical industry, for example aromatic oils, hydrolats, perfumes, essences and flavoured liqueurs.

Fractional distillation or rectification is the process of purifying alcohol by repeatedly distilling it to remove water and unwanted compounds. A fermentation mixture contains water and ethyl alcohol along with a small quantity of compounds that can contribute to the flavour of the product even if they are only present in parts per million. Reflux, rectification or Coffey stills all employ the same principal and system of operation. These stills have a multi-column rectifying system that will discharge a pure distillate with negligible amounts of fusel oils but also little taste. They were first developed to reduce costs involved in process duration.

Fractional distillation is a modified version of the simple distillation technique which allows for the separation of a complex solution into its different components in a single distillation run by taking advantage of the difference in their boiling points.

A simple distillation is effective if you intend to isolate a volatile component (those that evaporate more readily at lower temperatures) from one that is not volatile in a solution, or if there is a marked difference in their boiling temperatures.

The fractionating column design exemplifies the fractional distillation process. In simple terms vapours from a boiling mixture rise up a column or fractionating tower and as the temperature along the height of the column decreases the less volatile elements condense on special perforated plates placed horizontally in the column a few centimetres apart.

This may be considered as a single simple distillation run. As the vapours in the boiling mix continue to rise, these bubble up through the condensed liquid on the plates, enriching and reheating the condensate, initiating a second distillation.

Repeated condensation and evaporation of the vapours up the column on the plates results in greater concentrations of volatile components near the top of the column. Theoretically you can obtain 90% a/v with this design. The Armagnac Type Alembic Still, a professional continuous still is an example of this design

The fractional design is for columns with wide diameters and is therefore not suited for the hobbyist.

An inexpensive alternative was devised in which these plates are substituted with packing such as copper mesh or ceramic objects and create the same effect as the plates in a fractional column allowing for condensation of the vapours on the packing itself and reflux of the distillate.

Fractional distilling revolutionized the petroleum industry. A fractionating or refining tower is used to draw off various petroleum products at different levels. So, at the bottom bitumen type substances are drawn off, different fuels at higher levels and petroleum gases at the top. Liquid oxygen and nitrogen are also obtained through fractional distillation.

For the hobbyist the best way to obtain almost colourless and flavourless high purity alcohol is the reflux column. You may use your pure vodka like distillate as a base for distilling herbs or fruits or for making liqueurs. Alternatively, you may use it to produce your own high-grade whiskey.

An uninterrupted distillation process where a continuous flow of distillate is collected as output. The raw material may be continuously fed into the still at one point or reloaded without interrupting the collection of distillate.

A prime example of continuous distillation is the professional Armagnac Type Alembic Still with which high grade alcohol can be obtained in a single run which would normally require double or triple distillations using the simple distillation technique.

In the fractional continuous column (i.e the Coffey still) a continuous feed of an alcoholic solution such as wine is introduced in the column. As this solution comes into contact with the hot rising vapours, from the boiler, the more volatile components are stripped from the solution and rise up the column.

These alcohol vapours are drawn off and condensed after continuous rectifications (discussed further in the fractional distillation method). The denser components or the less volatile components of the alcoholic solution stream back down into the boiler.

Fractional and continuous distillations methods are only descriptive of the various processes that take place, and all may be incorporated into a single still design.

The graceful Charentais Alembic Still developed in France in the early 16th century to distill fine cognacs from Charentais wines is a semi continuous distillation process as you may allow for a continuous feed of wine for distillation.

The wine in the preheater in turn is transferred to the alembic pot via a connecting tube between the two for distillation, thus closing the circuit.

The Portuguese Arrastre de Vapour distilling system is yet another example of a semi continuous distillation design. This system is very versatile and may be constructed according to the clients’ specific needs. A two or more-column system allows for continuous drawing off of distillate as while one column is emptied and refilled the distillation process continues in the second column.

Professional continuous distillation systems have obvious applications for large-scale high-grade alcohol production with unlimited potential for producing any number of alcoholic spirits. The hobbyist distiller may want to experiment with the Charentais Alembic Still, fully functional yet beautiful in design. The Portuguese Arrastre de Vapour is a multi-purpose distilling system, due to its versatility, and may be used for the distillation of spirits, essential oils, medicinal herbal extracts, perfumes, rosewater etc.

Incorrect Readings – Comparing Refractometer and SG Hydrometer Readings
Bourbon Grain Bills – What Grain(s) should I use?