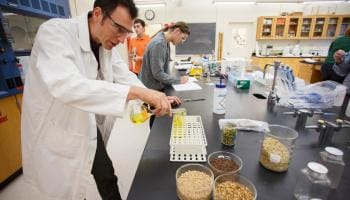 Barley, Malting and Malt – Part 4 of 4: Attributes of Malted Barley

During COVID-19 Lockdown, several basic Home Distilling (and Brewing) supplies – equipment and consumables – have been difficult to get hold of. Yeast, Nutrients, Enzymes and even Bubbler, SG Hydrometers and Alcoholmeters.

One of the most problematic however, was Malted Barley. Not just because stocks and supplies had run out, but because the plants producing it was shut down. Even under Level 3 Lockdown – when the plants could start operating again – it was not a situation where suddenly Malt was available again everywhere. Stocks had to be replenished, commercial Craft Brewers had to be serviced and supplied first, followed by the Craft Brewers, and only then the Home and Hobby Brewing Shops.

As a result, many Home Distillers (and Brewers) resorted to Malting their own grains and using that, but they did so armed with the most basic of information gleaned from YouTube and Online sources – most of them severely lacking.

This series of article will aim to address the shortcomings of information regarding Barley, Malt and Malting in three separate articles, focussing on Barley for Malting, the Barley Malting Process, and the Attributes of Malted Barley.

What Types of Malt can be used?

What is Malt Analysis and why is it important?

There are many different types of Malt Analysis, often with different specifications attached to them. These specifications most likely serve to ensure uniformity in the Malt Supply, and consistency during its eventual use.

The crucial test for the Distiller (or Brewer) is that the Malt must be uniformly modified with an analysis that falls within an acceptable range.

Numerous measurements are used in assessing the degree of modification of Malt, including Beta-Glucan content, Wort Viscosity, Turbidity, Friability, Growth Count, and Fine-Coarse Difference (the difference between extract from fine Grit and coarse Grit – milling sizes).

There is also newly developed analysis such as Mycotoxin Testing, Wort Fermentability, and Laboratory Bench Scale Lautering Tests, to further assist in predicting the traits of a Malt. These Laboratory analysis provide a fingerprint of the overall Malt characteristics.

What are the Key Factors in Malt Analyses, and what do they mean to the Distiller?

Standard Chemical and Physical Analyses are performed on Malt, using standardized Testing Methods and Equipment to ensure uniformity of results. Malts can have very different analyses depending on the Barley varieties used for Malting, with each variety having its own analytical signature. The Key Analyses and their importance to the Distiller are described below:

The percentage water in Malt is usually determined by Air-Dried Oven Analyses. Malt highly hydroscopic, so it absorbs moisture over time, particularly in humid conditions. The impact Malt Moisture on the Distiller is twofold – both economical and functionally.

The economic effect is simply the amount of water purchased, since Malt is sold “as is” (think to the uproar of water injected chicken in Supermarkets, and you will understand the issue). The functional effect relates tot the handling and breakage of Malt. Very dry Malt is prone to breakage and husk damage, potentially affecting its performance.

Malt Extract is the portion of the Malt that goes into solution during Mashing, and ends up forming the Wort after Lautering and Sparging. Extract is measured in two forms: Fine Grit or Course Grit (in some countries Grind is used rather than Grit – but the meaning is the same, i.e. the Milling Size). Fine-Grit Extract is obtained from a very fine grit size of Malt, and represents the maximum extract attainable. Coarse-Grind Extract is obtained from a coarser grit size of Malt, and more closely resembles a realistic expectation of extract. The difference between the Fine and Coarse Grit Extracts (known as the Fine-Coarse Difference or FCD) is often used as an indicator of the degree of modification of the Malt. The lower the FCD, the higher the modification.

Diastatic Power (DP) is the combined activity of the Saccharifying Enzymes (Beta and Gluco Amylase), Dextrinizing Enzymes (Alpha-Amylase) and other Malt Enzymes (Limit Dextrinase) in breaking down starches or Carbohydrates. The higher the DP, the more rapid the breakdown of the starch.

The Alpha Amylase content measures only the Dextrinizing activity in the breakdown of starch or Carbohydrates. Alpha Amylase is the enzyme that breaks down the 1-4 Linkage in starch. It “Liquefies” the starch, and other starch conversion enzymes then complete the breakdown into simple fermentable sugars.

The total amount of Nitrogen in Malt, multiplied by 6.25, is a measure of the total amount of Proteins (complex combinations of amino acids) in the Malt. Total Malt protein includes both soluble and insoluble proteins.

Only 20 to 25 % of the Protein in UnMalted Barley is Soluble, but through the action of various protease enzymes during Malting, 40 to 46% of the Protein becomes Soluble. The Soluble Protein consists of free amino acids and peptides of various sizes. Total Soluble Protein is an important factor affecting the fermentation, and for Brewers, the Foaming Properties, Body, Colour and Flavour.

The Ratio of Soluble Protein to Total Protein is often used as an indicator of overall Malt Modification – the higher the ratio, the greater the level of Modification.

Free Amino Nitrogen (FAN) is a measure of the portion of the Soluble Protein that has been further broken down into Free Amino Acids. FAN is a Macro Nutrient, and is therefore exceedingly important for Yeast Nutrition and Fermentation Performance.

In Barley, Beta-Glucan is present as part of the Cell Wall structure in the Endosperm. During Malting, Beta-Glucan Degrading Enzymes break down this structure, allowing further modification to occur. High Levels of Beta Glucan are associated with lesser degrees of Malt Modification.

Viscosity is a measure of the “Thickness” of the Wort Solution. It is an indicator of overall Malt Modification, with high viscosities indicating lesser degrees of Modification.

Hazy Wort indicates the presence of longer chain complexes of starch and proteins. A turbid wort can be associated with a low level of modification. Malts made from different varieties of Barley can vary greatly in turbidity.

The physical size of Malt Kernels is expressed as the percentage of Kernels that do not fall through a screen of stated size. That is an important factor to consider in Mill Settings.

Friability is determined by a physical test that measures the crushability of Malt, using an instrument with a rubber wheel that attempts to crush Malt through a rotating screen. The portion of the Malt that passes through the screen is the friable portion of the Malt expressed as a percentage. The remaining material is the unfriable portion. This unfriable portion can also be further analyzed to determine the percentage of whole Kernels present. These whole Kernels represent Malt that is essentially Barley that did not Germinate.

The friability test is greatly influenced by overall Malt Modification, Malt Protein and Malt Moisture. Uniformly well modified Malt will have a higher friable portion. High Protein and High Moisture greatly reduces the friable portion. Malt with friability greater than 90% may be damaged during pneumatic conveying such as in bulk unloading operations.

The table below gives an indication of a typical Malt Analysis:

Why do Malt Analyses change from Year to Year or Batch to Batch?

In addition, the analytical signature of a Barley Variety can change from year to year.

Each year the new crop is thoroughly evaluated in pilot and limited commercial-scale Malting to ascertain what differences exist (if any). The results of the evaluation are communicated to the end customer to arrive at an agreement about specifications for the new crop production.