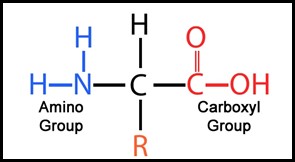 Amino acids rest at the very apex of cellular life. Cell structure and cell nutrition both depend on amino acids. There are 20 amino acids known to mankind and they are as follows:

The basic construct of an amino acid is shown in Figure 4. (1) An amino acid comprises an NH2 molecule attached to a central Carbon atom. Appended to that central atom is a hydrogen atom, a carboxyl structure and something called R, where R is a complex molecular structure referred to as a functional group.

It is possible for two or more amino acids to link together.  The NH2 group of one amino acid will hook to the carboxyl group of another with the net result being a water molecule ejected from the playing field. Such a linkage of amino acids is called a peptide. If between two and ten amino acids link together, this is termed an oligopeptide. More than ten aminos hooking up creates a polypeptide.

If a long series (50 to 2000) of amino acids all hooked up in a chain, the resulting polypeptide would be called a protein. Proteins can be very complex as there are 20 amino acids that can be used. Think of the combinations and permutations, especially in a large polypeptide!

Proteins get even more complex when structure is considered. The sequence of arrangement of amino acids in a protein is called the protein’s primary structure. Take that chain and twist it into a helix pattern and you have the secondary structure. You could also obtain a protein of secondary structure by laying chains beside chains in a pleated sheet format. This name derives from the fashion industry where fabric can be folded back onto itself to create folds (pleats). Imagine taking chains of protein, laying them side by each and then doing some folding to create a wrinkled pattern. Now, if you bend these secondary structures in complicated ways so that the R attachments hook to each other you have a tertiary structured protein. At the root of this structural alignment are electric charge and pH. Positive and negative charges attract. If the functional R groups on various amino acids in the protein have opposite charges, there is a tendency to create the secondary and tertiary structures. The pH of the protein chain will also help determine whether or not the functional groups carry a positive or a negative charge.

Take multiple tertiary structures and link them together. The result will be a quaternary structured protein. Again, think of the permutations and combinations.

Proteins are at the very crux of yeast cell structure. Without amino acids there would be no protein and no yeast cellular structures. Each of the internal organelles in a tiny yeast cell are made of an array of proteins. In fact, the yeast cell contains thousands of genes (genetic DNA segments) that serve to encode protein structure.

The world of protein is a daunting one at best.

About the Author: Malcolm Bucholtz, M.Sc is a long time home brewer and consultant to the craft distilling industry. Visit his website at: www.ProhibitionUniversity.com