How to Harvest Wormwood 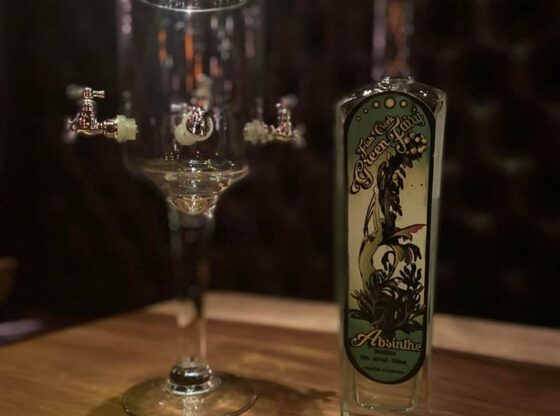 How to Harvest Wormwood

In my previous article “Absinthe in Saskatchewan”, I said I would be visiting Great Gido’s Homebrew distillery this summer to see how they harvest wormwood for distilling absinthe. Unfortunately, I missed the harvest this year due to the flu that took me out for a week.  I was looking forward to the trip.  It would have been a nice break from being cooped up for the last few months due to COVID. However I was able to connect with Owner/Distiller Mark Holinaty via Facebook to discuss this years Harvest.

This is Great Gido’s Homebrew’s second year of harvesting wormwood for their absinthe. With a plentiful crop, they were able to to picky and harvest the best wormwood, and still harvest more than they did last year. So that means they will be able to produce more absinthe this year than last. That is great news for all you absinthe lovers out there.

Wormwood is the mystical ingredient to Absinthe, that caused absinthe to be banned for a hundred years.  With all the lore and fantasy about its halogenic properties, it is a weed that is naturally grown in a farmer’s field, which most people don’t even recognize.  It can grow from 24 to 67 inches in height.  And wormwood tends to grow in dry sandy soil conditions.

It was the ingredient that is believed to give the green tinge to Absinthe.  However, Owner/Distiller of Great Gido’s Homebrew, Mark Holinaty, explained to me that the absinthe comes out clear until the last maceration step which includes other herbs which make the green colour, not the wormwood.  And that Wormwood on its own would be too bitter of an herb to be used by itself.  However, Mark declined to divulge his trademark recipe saying as each absinthe distiller safeguards their own recipes for this last important step.

When is Wormwood ready to harvest?

I’m not much of a gardener myself.  I’ve been trying to grow tomato’s using hydroponics for the last couple of years because I hate pulling weeds.  I’ve had mild success.  But I think Mark has the green thumb when it comes to wormwood.  Mark has several plots of wormwood on his farmland to harvest for his absinthe.  And says wormwood matures in late July and early August when it has the right maturity for the best essential oils.  There is usually only around a week to week and a half of time frame that is just right to harvest wormwood to harvest it at its peek.  It takes someone with some experience with the plant to be able to maximize its use for absinthe.

How do you now it is ready?

According to Mark, he says that ideally wormwood should be harvested once the claws have opened and are just turning yellow, and are not very big.  This will provide the best essential oil quality.  If the pods are: closed, has its 4 little arms, and are green, then it is to early to harvest.  However, if the blooms have turned yellow, become large and turned to pollen (that you can rub off on your fingers), then it is to late to harvest.  As mentioned earlier in this article, this window only lasts around a week to a week and a half.  But not all the plants tend to become mature at the same time, giving time to harvest the plant.

How do you harvest the Wormwood?

To harvest the wormwood, Mark cuts the wormwood with scissors just above the last dead leaf.  Then bundles, washes and dries it one time.  The next step is the trimming.  It is then trimmed just leaving the best of flowers.  The bundles are hung upside down to dry for 2 to 3 weeks, then cut into smaller pieces.  The pieces are then bagged to sweat for a week.  After this step the wormwood is dried again to ensure there is no further mild growth.

To extract the essential oils from wormwood, the dried clippings are put in a cold maceration for 48 hours with 70% fruit alcohol distillate.  After the 48 hours, it goes through a 6-hour hot maceration at 140f rather than slowly distilled.

“I basically extract the essential oil out of the material, which is how I also make my triple sec, and gin.”, Mark Holinaty

An interesting side note from Mark, that when the essential oil becomes separated in a cocktail, it is called La Louche.

The production of the absinthe has 3 distillations (macerations) steps.  Unlike what most people believe and hear, the absinthe is not green, it is clear after the first, two maceration steps.  The green color comes from the chlorophyll, which dies off and gets paler.  It is in its third maceration step of using a bouquet of herbs that give the absinthe its final colour.

This recipe of herms is a close guarded secret of all absinthe distillers.  Every distillery has their own recipe. said Mark Holinaty

So that is about it when it comes to harvesting and distilling wormwood for absinthe.  I would like to thank Mark Holinaty for taking the time to answer all my questions.  He is such a nice guy, I am hoping that I can get up to his distillery at some point to meet him in person and see his set up.  He is very active on Facebook showing his products and his latest creations.  You defiantly have to check it out.

2020 Canada Day Sale
How to Re-Start a Stuck Fermentation