The Science behind Wooden Barrels 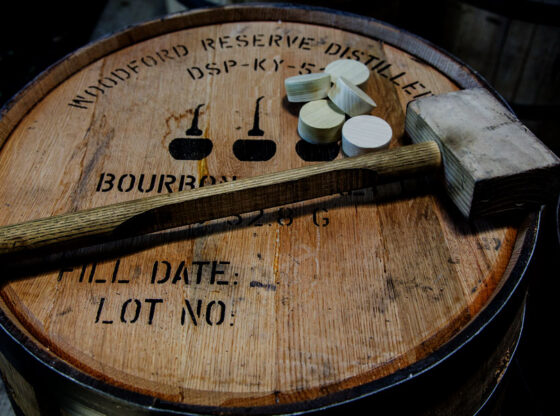 The Science behind Wooden Barrels

Of all of the species of hard wood in the world, there is a very good reason why we only use oak.

As a member of the beech family, of the genus Quercus, oak has large radial grains of high density which grow straighter than the majority of other hardwoods making it perfect for tight cooperage. More importantly however are the natural chemical compounds found inside oak which impart flavours, sugars, aromas and body onto any liquid it interacts with. Flavours which are extracted by a cask during maturation are known as ‘cask-extractive congeners’.

For the effects of spirit maturation, there are five primary chemical constituents:

As the name suggests this compound is primarily composed of a form of glucose (sugar). Despite this is it does not impact on any notable flavour elements in a mature spirit but instead acts as a binding agent or polymer to help hold the wood together (i.e. it is essential for oaks’ ability to hold a tight cooperage).

While also a sugar-based polymer like regular cellulose, hemicellulose is not solely composed of glucose like cellulose but multiple sugars such as glucose, xylose, mannose, rhamnose, arabinose and galactose.

Most importantly, these sugars are much more unstable than glucose allowing them to breakdown into their individual parts when stimulated by dramatic changes in their environment such as heat. It is these newly activated hemicellulose sugar condensation by-products (furfural, hydroxymethyl furfural, maltol, cyclotene) which ultimately give us the deep brown colours and subtle almond, walnut, butter and maple notes from a lightly toasted cask.

When the heat is turned up even higher to the levels of charring, most of these flavours are pushed aside by rich caramel and toffee. For hemicellulose to begin converting into colour and flavour it needs to be activated by a heat of at least 140°C.

Anywhere there is a hardwood, there is lignin. While also a polymer, lignin is composed of two core structural parts, guaiacyl and syringyl. It is the direct result of these combined parts which is responsible for giving us sweet and spicy aromas, especially vanilla which is pulled from its chemical namesake – vanillin. Lignin congeners can be released very easily with only the smallest amount of activated heat however it’s the effect of heavy toasting and deep charring which breakdown the lignin further into steam volitile phenols responsible for delivering smoky flavour elements.

As the name suggests, it is from tannin that we first derived tanning agents for leather and early dye’s giving us the common word – ‘tan’. While there are many different sources of tannin in the natural world (such as grape skins), oak tannins are unique in that most of them can be broken down not by adding heat, but by simply adding water. For this reason, oak tannin are classified as hydrolysable.

In its natural form Tannin would normally overwhelm the majority of the other flavours in wood.

Acting primarily as a means of food storage for the tree, tannin helps protect the tree from fire and bacteria. It evolves into a natural bitter deterrent to insects in a similar way the coffee plant (Coffea) produces caffeine as a bitter pesticide. Because it is a hydrolysable compound, seasoning is used to remove large amounts of bitter tannin from the oak prior to cooperage.

That said, we still need a small element of tannin to supply us with oxidization and fragrances like cooked apple. More importantly however is the role tannin plays on long maturation. The wood chemical reacts slowly with the oxygen molecules in the spirit, over time creating a new compound called diethyl acetal. This new compound ensures that a 20+ year old Scotch or Cognac for example, is left with rich and complex top-notes and not flat and insipid.

Unlike the above components, lactones are only really relevant to American whiskey. Neither a polymer or sugar compound, lactone is a flavour element influenced by certain oils, soluble fats and waxes simply known as lipids which deliver a unique coconut-woody taste to a spirit. While present in all types of oak, lactones are found in their greatest quantity in American White Oak (with the exception of the rarely used Asian variety), releasing almost all of its flavour attributes in the first year of a first-fill barrels maturation.

For this reason, Bourbon, Tennessee and Rye whiskeys all have outstanding vegetal characters when compared to Scotch which depends more on sweet, smooth polymers for flavour. Well-seasoned and lightly toasted barrels can release further amounts of lactone while deep alligator charring can react the other way, reducing its effect.

And charring after all, is a subject unto itself.